Our Derby Ducks enjoyed a nice 3-day Memorial Day Weekend but are back and ready to race in three locations this weekend. 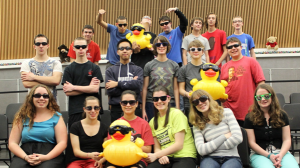 For their first race, the Derby Ducks are headed to Pennsylvania for the inaugural Souderton Area Duck Derby Race: We’re Quackers for Music! Starting at 10am ET on Saturday, May 31, 2014, 5,000 Derby Ducks will gather in Branchwood Park-Camp Road in Telford, PA. Spectators will be able to enjoy food, games, a moon bounce, face painting and of course, MUSIC! Duck Race prizes include $1,000 cash, tickets to a Philadelphia Eagles game, tickets to Hershey Park and more! Hosted by the Souderton Area Big Red Band Boosters Inc., all Duck Adoption proceeds will benefit the Souderton Music Programs. Don’t miss out and Adopt a Duck today!

Also on Saturday, May 31 is the second annual Hawkins County Duck Derby in Kingsport, TN. Starting at 12pm ET 5,000 Derby Ducks will race at the Surgoinsville Riverfront Park hoping to win one of three prizes: $2,000 cash, $1,000 cash or a 42” HD TV. All Duck Adoption proceeds will benefit the Boy’s and Girl’s Club of Hawkins County. Don’t miss out on another great event!

Our third race takes us on the other side of the country to Port Angeles, WA for the 25th Annual Great Olympic Peninsula Duck Derby. For its silver anniversary, Port Angeles will have a very special appearance by the World’s Largest Duck, Giant Quacky. Standing at 65 feet tall and weighing 1,100 pounds, Giant Quacky has been in Port Angeles all week to support Duck Adoptions. On Sunday, June 1, 30,000 Derby Ducks will race in the Lincoln Park Pond hoping to win one of 42 prizes with a grand prize of their choice between a 2014 Toyota Tacoma and a 2014 Toyota Corolla. All Duck Adoption proceeds will benefit the Olympic Medical Center Foundation and the Sequim Rotary Club. Visit online today to see where you can Adopt a Duck for this ducktasitc event! 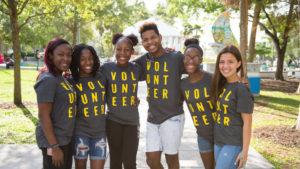 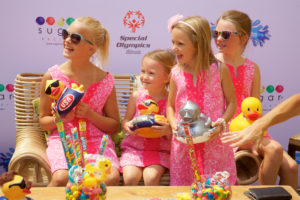 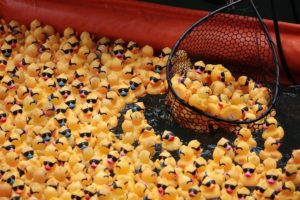